The ten most beautiful spots in France to visit 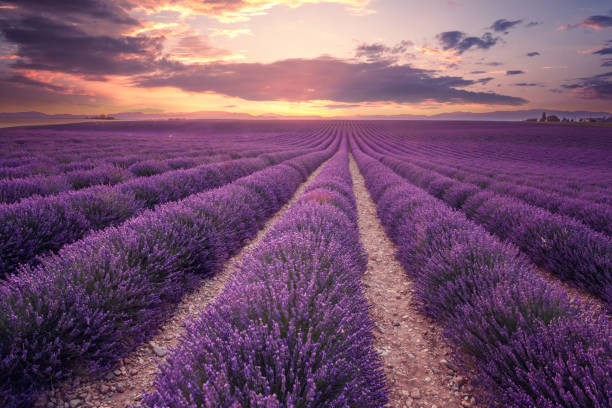 There’s a reason France is the world’s most visited country. It has some of the world’s most magnificent wines and food, as well as some of the most gorgeous destinations. There are numerous scenes throughout l’Hexagone that will steal your breath away. There is more than enough to delight curious travellers, from rolling vineyards and tumbling valleys to towering sand dunes and picturesque villages. The most beautiful spots in France to visit.

However, with so much to see and do in France, deciding where to go can be difficult. So, to help you narrow down your choices, we’ve compiled a list of our top recommendations to inspire your travel bucket list.

1. Champagne is the birthplace of Dom Pérignon

Without mentioning the birthplace of bubbly, a list of the finest locations to visit in France would be incomplete. The Champagne area, located in northeastern France and about 1.5 hours from Paris, is a must-see for everyone who enjoys a glass of bubbly. It’s incentive enough to visit the region just to watch the sun set over the gorgeous rolling vineyards and dreamy countryside. Those interested in sampling the fruits of the land might take a tour of one of the famed Champagne houses. And this will undoubtedly be a wonderful experience – unless they chose to overindulge!

Among the prominent houses that open their doors to the public are Mot & Chandon, Veuve Cliquot, Taittinger, and Dom Pérignon. The latter is most famous for its namesake, a Benedictine monk who was a quality pioneer for Champagne wine. Dom Pérignon, contrary to popular perception, did not create the world-famous wine. While visiting his cellar and ultimate resting place in the Abbey of Hautvillers, you will learn many interesting things. 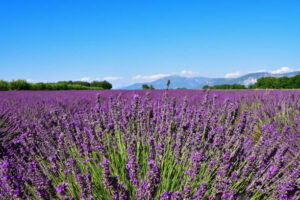 Every summer, the apparently unending sea of lavender fields transforms Provence into one of France’s most attractive – and aromatic – destinations. During this time, the divinely perfumed crop may be seen practically everywhere in the region. The Valensole Plateau, the Sault Plateau, and the Luberon Valley are some of the most attractive places to experience it. The flower fields surrounding the Notre-Dame de Sénanque Abbey, however, are the ultimate postcard shot. The majestic 12th-century church, nestled in the calm countryside near the village of Gordes, is engulfed in a sea of purple every June and July.

These lovely lavender fields, along with the local honeybees, are tenderly nurtured by the abbey’s monks. Visitors are welcome to stay with them and experience a peaceful spiritual retreat. The fields are available from 09:30 throughout the summer and 13:00 on Sundays if you choose to make it a day trip. Just keep in mind that the location’s special beauty means it gets highly busy during this season. As a result, arrive early and take the first tour of the day, which begins at 10:30 a.m. 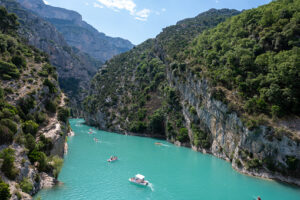 If a vacation to the Grand Canyon in Arizona seems too far away, you might always settle with its French counterpart. The 700-meter-deep Gorges du Verdon, located in the Provence-Alpes-Côte d’Azur area of southeastern France, are a really breathtaking site to see. The falling limestone canyon, carved by the Verdon River, is Europe’s greatest. It’s also a destination for watersports and adrenaline-fueled activities.

Cruising over the 25-kilometer stretch of beautiful blue waters that flow into the man-made Lac de Sainte-Croix is a once-in-a-lifetime experience. More daring travellers, on the other hand, might decide to go white-water rafting down the rapids. A more leisurely day might be spent hiking around the canyon’s 100-kilometer rim or riding through the steep limestone walls on horseback. Whatever you do, be sure you have your camera with you. After all, this is one of France’s most beautiful destinations. 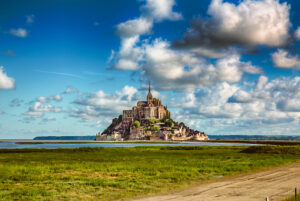 Many lovely villages can be found in France. Few places, however, are as magical and otherworldly as Mont Saint-Michel and its magnificent abbey. The stunning mediaeval abbey of Mont Saint-Michel, perched high on the rocky island of Mont Saint-Michel, 600 metres off the coast of Normandy, appears like something straight out of a children’s fantasy. The tiny, winding alleyways and charming timbered-framed cottages that lead up to it add to the romance. In fact, the breathtaking landscape inspired Disney’s Tangled movie’s Rapunzel’s Tower and the Kingdom of Corona.

In the 8th century, the magnificent island settlement functioned as a major Christian pilgrimage centre. It is now a UNESCO World Heritage Site that receives over three million visitors each year. It goes without saying that it is one of the most popular tourist destinations in France outside of Paris. The enormous ocean and sandbank that surround the island, on the other hand, make it appear less enticing.

Even more mysterious is the fact that it gets completely sequestered when the tides are really high. Fortunately, most visitors may now reach the island by crossing a 2,500-foot-long bridge. They can, however, navigate the dangerous mudflats when the ocean recedes during low tide if they are feeling bold. 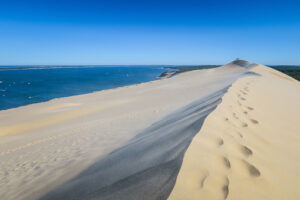 Nature enthusiasts will undoubtedly enjoy taking in the stunning 360-degree views from the top of Europe’s tallest sand dune, the Dune du Pilat. The stunning natural wonder, located near La Teste-de-Buch in the Arcachon Bay area, is one of France’s most iconic sites to visit. Indeed, almost one million people visit each year to climb the 154 wooden steps to the top and walk the 2.7-kilometer ridge.

The effort is well worth it, with the dazzling Atlantic Ocean on one side and lush green pine trees on the other. Indeed, the soaring dune provides some of Europe’s most breathtaking natural views. Paragliders and other outdoor sports enthusiasts go to the Dune du Pilat. Meanwhile, the five surrounding campgrounds make it popular with campers. Corniche Beach is a great place to cool off after your successful climb. This is located at the base of the dune and is readily reached by the main entrance. 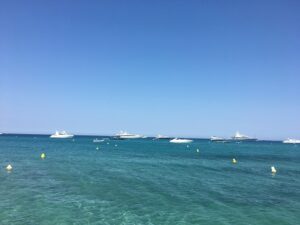 If you’re hoping to live the opulent life – or at least dip your toes into it – a trip to Saint-Tropez is essential. After all, this lovely sun-drenched coastal resort on the French Riviera is known for its fancy stores and perfect sandy beaches, not to mention celebrity yacht-hopping. Originally a peaceful fishing village on the Côte d’Azur, the modest town transformed into a haven of luxury in the late 1800s, owing to Impressionist painter Paul Signac and other notable painters such as Henri Matisse and Albert Marquet.

Saint-Tropez did not achieve international prominence until the 1950s, when Hollywood siren Brigette Bardot walked onto the scene. Her film, Et Dieu Créa la Femme, was set at the resort (And God Created Woman). Despite its reputation as a playground for the wealthy, the town manages to retain its original attractiveness, particularly if visited outside of peak season. Older residents still play boules at the Place des Lices, despite the sparkle and splendour. Others, meantime, enjoy a cup of coffee while strolling along the lovely port. Whether you want to relax on the famous Pampelonne Beach, visit the six small towns on the rocky Saint-Tropez peninsula, or take in the breathtaking views from the hilltop town of Saint-Tropez, there’s something for everyone.

7. The sacred highland pilgrimage of Rocamadour 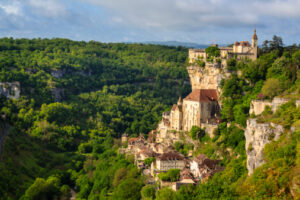 The lovely hilltop village of Rocamadour, behind Mont-Saint-Michel, is France’s second most visited attraction for a reason. The sacred village, perched high on the side of a limestone cliff overlooking the Alzou canyon in the Dordogne area, is nothing short of magnificent. The UNESCO-listed mediaeval town was formerly known for its sanctuaries and was a popular pilgrimage destination. It also houses a 15th-century figure of the Black Madonna, which can be found in the Notre Dame Chapel.

After climbing the 216 steps (Le Grand Escalier) to the summit, visitors can explore the chapel and seven other religious buildings. Amazingly, pilgrims used to climb these on their knees! The views of Rocamadour, the Alzou canyon, and the wild and untouched terrain below are unparalleled from the village’s vantage point. They are, without a doubt, well worth working up a sweat for. You can also take a boat ride in the adjacent Gouffre de Padirac if you have time. This magnificent underground network of caverns is brought to life by massive rock formations, underground lakes, and massive stalactites and stalagmites.

8. The Loire Valley is France’s garden 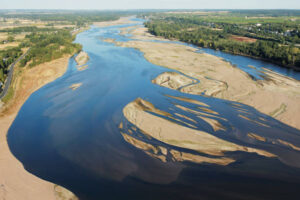 The Loire Valley, also known as the “Garden of France,” was formerly the haunt of French monarchy and nobility. Today, however, it is one of France’s most iconic tourist destinations, open to all. This is due to the region’s 300 ornate chateaux, some of which date back to the ninth century. Many of these have been designated as UNESCO World Heritage Sites, which is not surprising. While they are all well-kept and have their own stories to tell, some are more revered than others.

Château de Chambord, for example, is regarded as one of the most attractive in the valley due to its gorgeous French architecture and adjacent deer-filled park. Meanwhile, the Château de Chenonceau is known for its distinctive blend of Gothic and Renaissance architecture that looms over the Cher River. The fairytale-like Château de Sully-sur-Loire, which has hosted notable historical characters such as Joan of Arc and Louis XIV, has a more mediaeval beauty.

Of course, with so many lovely chateaux to visit, you might want to change things up by visiting one of the region’s many vineyards. After all, the region is known for its world-class wines, and many local wineries open their cellars to the public for tours and tastings.

9. Auvergne: the place of timelessness 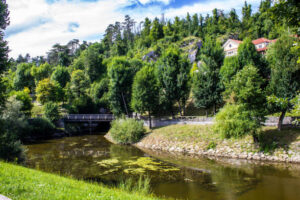 The Auvergne Volcanoes Regional Nature Park, located in the heart of central France, is Europe’s greatest volcanic complex and a prehistoric relic. The park, which spans 395,000 hectares, is home to four volcanic massifs. The Puy de Dôme is the highest volcano in the region, standing at 1,465 metres. Visitors travel from all over the world to see these inert giants that have been resting for thousands of years. Hiking, cycling, and hot-air ballooning are all popular activities on the peaks.

Natural hot springs and mineral waters abound in the old volcanoes, making them a popular thermal spa resort. Vichy, Badoit, and Volvic water are all derived from this source. Aside from that, the region has several mediaeval villages, abbeys, and castle ruins to see, making it an excellent choice for a relaxed vacation in France. 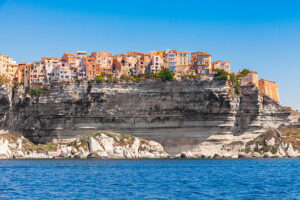 When you step onto the lovely Mediterranean island of Corsica, you can forget where you are. Because of its unusual location between France and Italy, it encompasses the best of both cultures. The ‘Island of Beauty,’ as Napoleon’s birthplace is known, definitely lives up to its moniker. It has a gorgeous yet wild appeal, with stylish seaside cities, steep granite peaks, and unspoiled forests. It is also a hotspot for snorkelling and scuba diving, with 1,000 kilometres of lovely blue shoreline to explore. Those who would rather just sunbathe can do so on one of the island’s numerous beautiful beaches.

Despite its international appeal, Corsica has maintained its unique culture and charm. You might catch a glimpse of this while listening to a classic polyphonic song, or at a village festival or religious procession, for example. Don’t be shocked if you come across a few of donkeys when out hiking in the countryside. Pigs, cows, goats, and sheep are among the many free-ranging animals found on the island. However, there are no hazardous snakes here!